The first annual Marginal Arts Festival will be held at venues throughout Summerland on the Labour Day long weekend, September 1-4, 2016. The Marginal Arts Festival is inspired by George Ryga, 1932 - 1987, BC's greatest playwright, who lived in Summerland, BC and created most of his work here. This year’s launch will showcase acclaimed musicians, stimulating literary events, and not-to-be-missed reminiscences by George Ryga's colleagues and friends. The headliner is none other than international jazz sensation Campbell Ryga, Grammy nominee, Juno Award-winner and the eldest of George's sons. 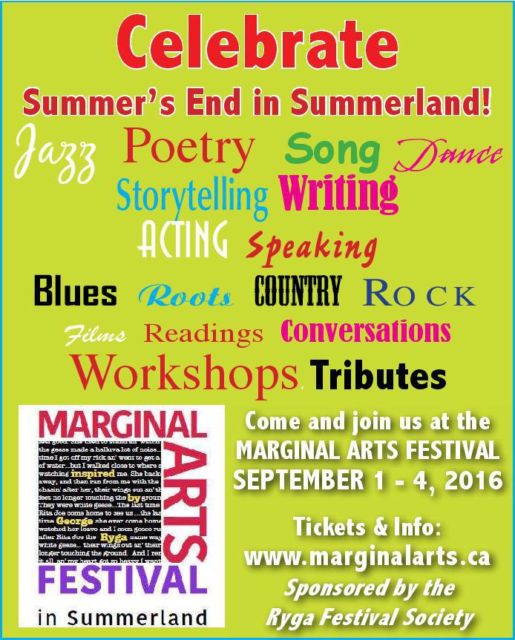 As writer George Ryga's birthday approaches on July 27, the Ryga Festival Society is making final preparations for its first annual Marginal Arts Festival in honour of the Summerland writer, whose works have been performed around the world. Ryga wrote on his manual typewriter surrounded by family, friends, and orchards in the shadow of Giant's Head. His works were performed on TV, and radio, film and theatres large and small.

The Marginal Arts Festival in honour of George Ryga has concerts, readings, and workshops scheduled for the Labour Day long weekend – altogether over a dozen events are planned.

The performances kick off with a celebration of the spoken word: “Outspoken!” will showcase this increasingly popular art form which audiences find compelling entertainment. This coffeehouse-style, family-friendly event takes place at the Summerland Waterfront Resort on Thursday, September 1 at 7 pm.

One of the highlights of the festival will be a tribute to George Ryga with an appearance by Ann Mortifee, whose haunting music is an integral part of Ryga's powerful play, “The Ecstasy of Rita Joe”, which opened Canada's National Arts Centre in 1969. This tribute is followed by the variety show, “Quit Your Day Job” on Friday, September 2, celebrating talented Okanagan artists who could indeed quit their day jobs and perform full time.

Another highlight of the festival is an evening with three-time Juno Award-winning jazz artist Campbell Ryga and his ensemble. This is the first time Campbell Ryga has performed in Summerland for many years and music aficionados are eagerly awaiting this concert, entitled “Homecoming: Campbell Ryga at Centre Stage”. This will take place at Summerland’s Centre Stage Theatre on Saturday, September 3 at 7 pm.

These fabulous Okanagan bands will perform at a free concert during the day on Saturday, September 3, 12-6 pm in Summerland's Memorial Park on Wharton Street:

Daytime workshops conducted by professional writers, actors, and directors include the following:

Your Story, Your Voice, with Deborah Williams: a 2-day storytelling workshop, August 23-24.

Work with Deborah Williams of Mom's the Word and The Flame (Vancouver's premiere storytelling event) to learn how to tell a great story. She will share her 30 years of expertise in storytelling to give you the tools to create your story in an inclusive, learning atmosphere. Aug 23-24, 10-3

The Building Blocks of Acting, with Heather Davies: a 2-session workshop for ages 16 & up who are interested in acting, writing or directing. Stratford-based Heather Davies recently adapted George Ryga’s novel Night Desk for the stage; and has worked with the Royal Shakespeare Company, the Grand Theatre, and the Stratford Festival, among others. Sept 1-3, 10-1

Everyone Can Sing, with Ann Mortifee: This workshop is for anyone who would like to have some fun while strengthening his or her voice. Ann Mortifee’s extraordinary 4-octave voice and compelling stage presence led to years as a concert artist performing with such luminaries as Harry Belafonte and John Denver. She has sung with symphony orchestras throughout North America and Europe, and written ballet scores, including the internationally acclaimed The Ecstasy of Rita Joe. Sept 2, 10-1

Creative Non-Fiction Writing, with Mark Leiren-Young: This workshop is for anyone who wants to write. Mark Leiren-Young is the author of two comic memoirs, one of which won the 2009 Stephen Leacock Medal for Humour. He is an accomplished playwright, who has had plays produced in North America, Australia, and Europe. As a journalist, he has written for Time and Maclean’s, and has interviewed hundreds of celebrities ranging from William Shatner to Salman Rushdie. Sept 2, 10:15-1:00

Other People’s Stories, with Leanna Brodie: This workshop will explore how to use historical and documentary materials such as interviews, books, newspapers, photos and other artifacts and bring them to life in a compelling way. Leanna Brodie is a playwright, translator, and actor whose work has been produced across Canada as well as in New Zealand, the UK, and the USA. She was the 2016 recipient of the George Ryga Scholarship at the Banff Centre Playwrights Colony, where she worked on her play Turbulence, about the wind farm controversy in Ontario.

There will also be free play readings, courtesy of the Playwrights Guild of Canada and the Canada Council, taking place at The Meeting Place, Summerland Library, at 2:30 on Sept 2 and 3.

Mark Leiren-Young will read from his most controversial and widely produced play, Shylock, from the recently completed The Bar-Mitzvah Boys, and he will discuss his unproduced play The Ecstasy of George Ryga. Sept 2, 2:30-4.

Leanna Brodie Ms. Brodie will be reading from The Vic, about the search for a woman who has disappeared at the edge of a city; from The Book of Esther, a moving coming-of-age and coming out story set during the farm debt crisis of 1981; and from Schoolhouse, also in a rural setting, which examines the struggles of a freshly minted teacher with a juvenile delinquent.

For more information, to reserve tickets, or register for workshops, visit www.marginalarts.ca